Mibugawa leased idle land in Iwaki City on which it constructed the mega-solar power station that it now operates. The annual power generation of this plant is 2,200kW which corresponds to the annual electricity consumption of 700 ordinary houses. The generated power will be sold to Tohoku Electric Power Company for over 20 years under Japan's feed-in-tariff scheme.

Marubeni and Mibugawa have each brought their strengths to realize this project. Marubeni has a proven track record as the Project Integrator of the Fukushima Floating Offshore Wind Farm Demonstration Project in Fukushima Prefecture and has the advantages of electric power development and experience in power plant operation. In addition, Mibugawa possesses strong development capability and management experience of renewable power projects such as mega-solar.
Marubeni will conduct stable operation of the plant by utilizing Mibugawa’s five-decade-long operation know-how of renewable energy power plants.

Marubeni has eight domestic mega-solar power projects (14 power plants) in addition to this project and a gross power output of about 200MW.
Small / medium-scale hydro power generation is the center of Mibugawa’s business and Mibugawa is determined to further spread utilization of renewable energy, including mega-solar, to meet society’s demand for the reduction of environmental impact.

【Panoramic Photograph of the plant】 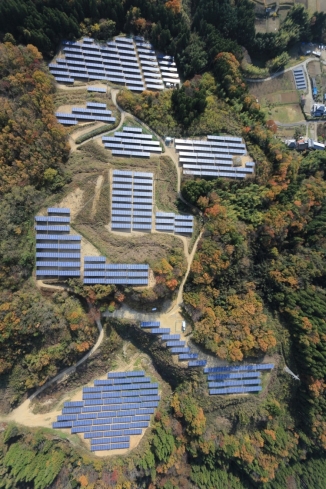