Marubeni Corporation (“Marubeni”) has decided to acquire 20% equity stake of Maynilad Water Services, Inc. (“Maynilad”), water and sewerage utility in the Republic of the Philippines.

Maynilad provides a full range of water services including water and sewerage treatment, operation and maintenance of water and sewage network, metering and water charge collection in 17 municipalities of western part of Metro Manila under the concession agreement with the Philippines government (the “Concession Agreement”). The population in the service area is about 9.5million*1, which corresponds to approximately 10 percent of the Philippines’ total population. It is the largest in the world in terms of the size of population within the service area as a private water utility based on a single concession agreement.

Marubeni has undertaken a pre-feasibility study commissioned by Ministry of Economy, Trade and Industry of Japan in 2011, and a preparatory survey for PPP infrastructure commissioned by Japan International Cooperation Agency (“JICA”) in 2012 to investigate operational issues and to help the development of the future business plans of Maynilad. In the service area of Maynilad, improvement of non-revenue water ratio*2 and sewerage service coverage (around 10% at present) are major management issues to be addressed in the future. Marubeni will proactively play its role to resolve those issues, aiming to procure Private Sector Investment Finance of JICA through the above-mentioned preparatory survey for further development of water and sewage services in Metro Manila.

Marubeni has been engaged in the same type of concession business in Chile through Aguas Decima (100% subsidiary) and Aguas Nuevas (50% shareholding), and also has been expanding the sewage treatment business in China through Anhui Guozhen Environment (30% shareholding). For Marubeni’s water business, Maynilad will be a core business platform in the region of ASEAN. Marubeni will continue to actively pursue the business opportunities of private water services by utilizing the know-how and expertise acquired through those existing water group companies.

*1 : The population of 23 wards of Metropolitan Tokyo is approximately 9million.
*2 : Proportion of the water volume not counted in the sales revenue out of total produced water volume, such as leakage, theft, free of charge to the public purposes.Currently it is around 40%. 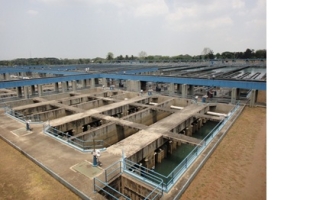 <Maynilad's Service Area in the Philippines> 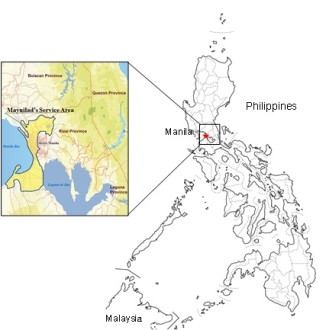