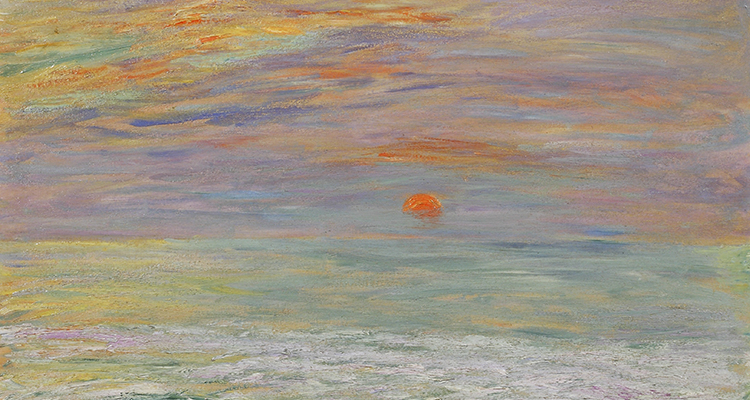 Pursuing and Passing Down the Beauty - Kimono of the Marubeni Collection

Kimono Exhibition and Sales meeting will be held by Kimono Manufacturing and Sales Company the Kyoto Marubeni Co., Ltd. on the following schedule. If you are interested, please come by all means.
June 16(Thu.) - June 18(Sat.), 2022 ／July 28(Thu.) - July 30(Sat.), 2022
At Marubeni Hall on the 3rd floor of Marubeni Building
For more information, please visit the Kyoto Marubeni Co., Ltd. website. 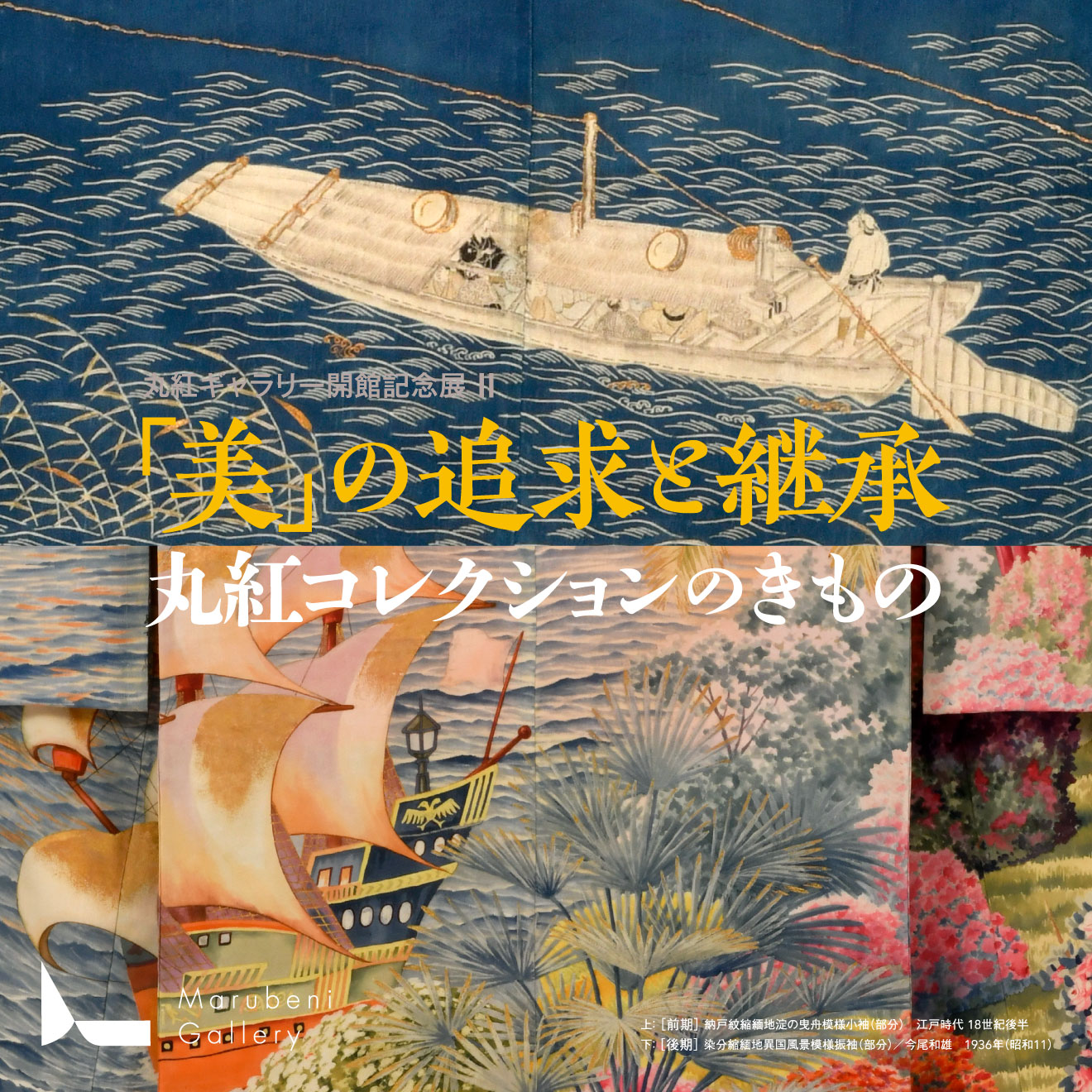 We are pleased to present the second Opening Exhibition, Pursuing and Passing Down of the Beauty – Kimono of the Marubeni Collection (from June 7 to August 1, 2022), to share a part of our textile collection, one of the three pillars of the Marubeni Collection, with you.
Through this exhibition, we would like to present a new perspective and the results of our research on what kind of eye for aesthetics the pre-war Marubeni Shoten company used when gathering items for a textile collection focused on the Edo period (1603–1868), their intentions behind doing so, and, as dyeing and weaving techniques evolved, how they then applied traditional designs to new ones to create novel design expressions that fit the times.

Prominent Works to be Displayed

Edo period, second half of the 18th century

This kosode has a design placement called edozuma-moyō, in which motifs are placed from hem to collar. The boats depicted on this kosode are towboats called Sanjikkoku-bune on the Yodo River. The facial expressions of the captain, sailors and the passengers are vividly portrayed by kaki-e (ink painting) technique. It has been said that the sketch was drawn by Katsukawa Shunshō (1726?-1792), an ukiyo-e artist of the mid-Edo period. Although the times are different, Marubeni's founder Itoh Chubei started his first business across Japan by travelling down the Yodo River, thus this kosode is historically an important piece for Marubeni. The towboats on this kosode became the motif of the Marubeni Gallery logo. 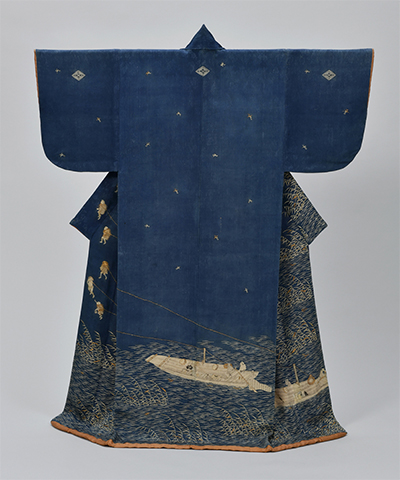 Chapter 2 Encounter with New Technologies: Kimono on the eve of the collection

Kimono with design of Choyo-moyo (patterns based on the Choyo Festival, the Chrysanthemum Festival or the Double Ninth Festival) on parti-colored silk crepe

Choyo no Sekku is one of the five seasonal festivals on the ninth of September. This kimono is decorated with the theme of the festival, chrysanthemums, to wish for longevity. As the pattern is repeated in the same direction and regular interval, we can tell that kata-yuzen, a paste-resist dyeing utilizing stencil, was used. In kata-yuzen technique, there are two ways of dyeing: one is to place the stencil on the fabric applied paste resist, and rub dyestuff into the fabric from above the stencil, which is called suri-yuzen, and the other is to rub the chemical dyestuff mixed with rice paste into the untreated fabric from above the stencil and fix the colors by steaming, which is called utsushi-yuzen. This kimono employed the latter. Utsushi-yuzen tended to reflect less differences in skill levels of dyers, which allowed it to widely spread as an efficient dyeing technique for production with a uniform quality. 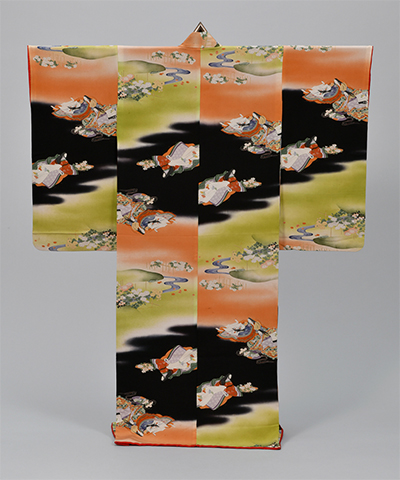 Chapter 3 Pursuit of Designs and Techniques: Learning from tradition

Edo period, first half of the 19th century

This is a katabira made of high-quality plain weave ramie parti-colored in pale yolk yellow with a ground pattern similar to matsukawabishi (pine-bark lozenges), on which fine patterns are created with shades of indigo realized by chaya-zome and only a slight embroidery. Chaya-zome is commonly known as a dyeing technique often used for katabira with landscape patterns worn by women of the samurai class, but there are also examples of townswomen’s katabira created with chaya-zome, each of which reflecting the taste of wearers of each class. However, this garment decorated with bonsai is a typical of women’s taste of both classes. 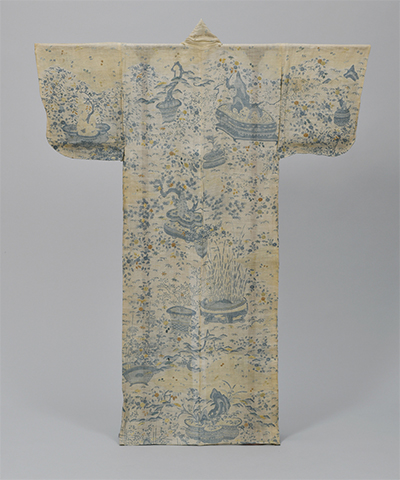 Kimono with design of bonsai on white silk satin crepe

This is a Kimono created by Ueno Tameji, the master of kyo-yuzen (yuzen-zome production created in Kyoto), inspired by “Katabira with design of bonsai on white plain weave ramie”. When viewed side-by-side, Tameji’s work has a somewhat neater impression than the original that has motifs scattered with little space between them. We can tell that Tameji did not just copy the design, but rather took out each motif on the original katabira one by one and reconstructed them for an updated kimono of the day. In the early Showa period when this piece was produced, Tameji was struggling with new creation, and studied and reproduced various works from the past. Tameji was designated as a holder of Important Intangible Cultural Property (Living National Treasure) in 1955. 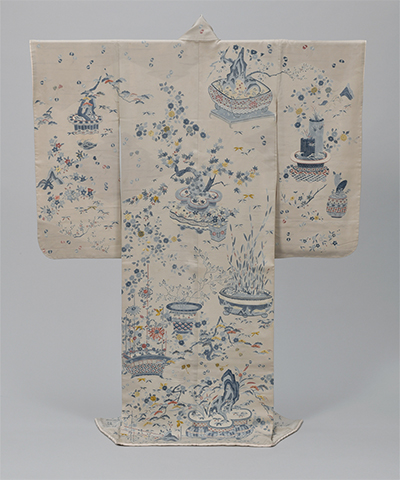 An eye-catching furisode with an exotic landscape. The mountains in the distance, reminiscent of the Alps, were a motif influenced by arupin-moyo (imaginary exotic landscape patterns) popular at that time. The popularity of arupin-moyo was a reflection of the general Japanese people’s aspiration for foreign countries now that they became able to obtain overseas information through books and others. The touch almost like oil painting was realized by a technique called ekigaki. It is one of the new yuzen-zome techniques developed around the 10th year of the Taisho period (1921). Colored paste-resist containing dyestuff mixed in the paste used in kata-yuzen (stencil paste-resist dyeing) or itomenori (thread-like paste-resist dyeing) was improved, which enabled the direct drawing onto the fabrics with brushes.

The Echoes of Modern Art between Japan and France 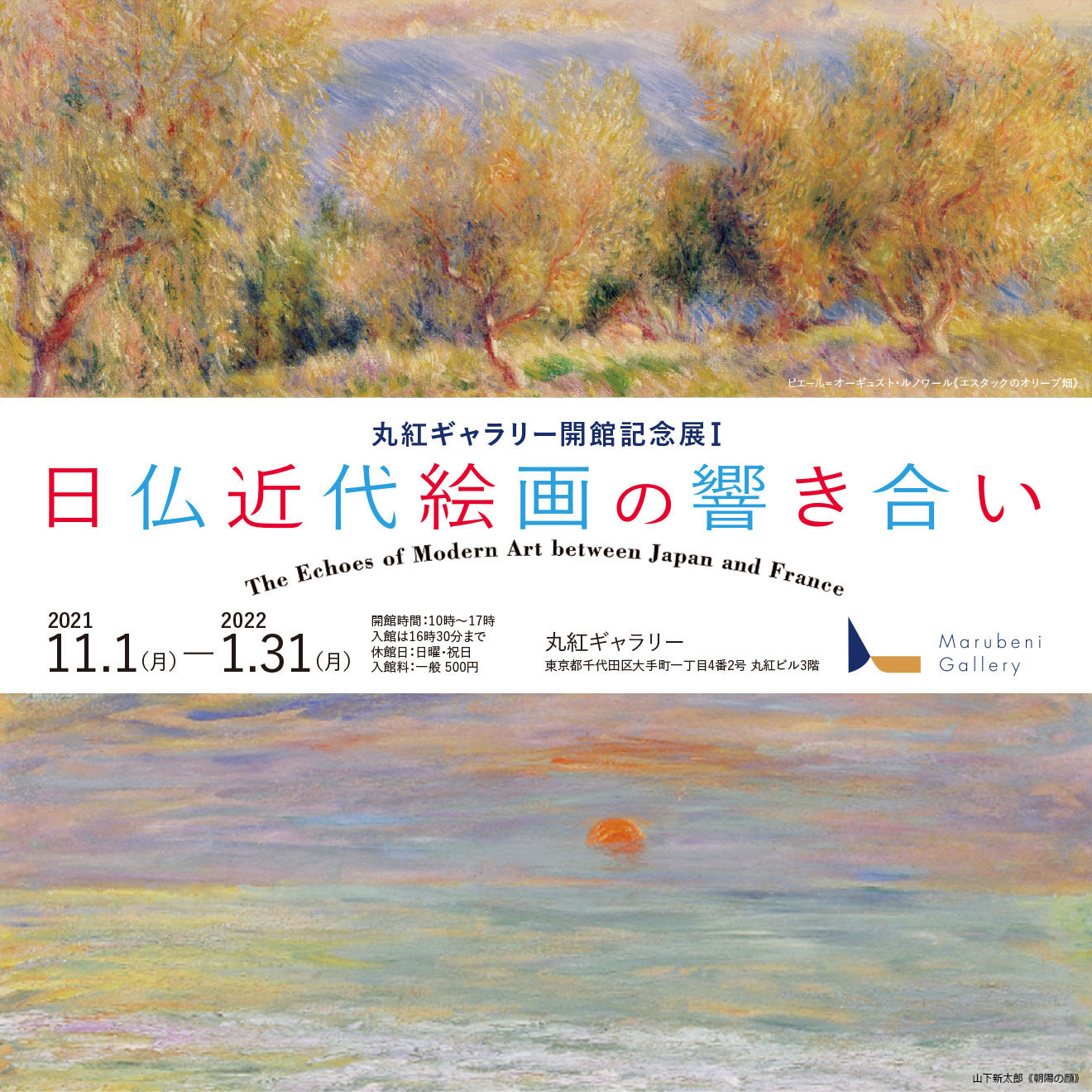 This exhibition, entitled “The Echoes of Modern Art between Japan and France”, celebrates the opening of the new Marubeni Gallery. To represent the French side, we have selected the two French realism landscape paintings, one by Corot and one by Courbet, in addition to works by French impressionists, symbolists and fauvists such as Renoir, Redon, Dufy, and Vlaminck. Representing the Japanese side, we have selected pieces by such painters as Fujishima Takeji, Okada Saburosuke, Wada Eisaku, Kawashima Riichiro, Umehara Ryuzaburo, Yasui Sotaro, Koiso Ryohei, and Ogisu (Oguiss) Takanori. All of these artists were strongly influenced by French modern artists in the late 19th and 20th centuries. Free from traditional classification, we are exhibiting these works from the Marubeni Collection according to such elements as styles of brushstrokes, colors, and so on. In this way, we review the artistic exchanges, or echoes, between France and Japan in modern and contemporary painting.

Prominent Works to be Displayed

Fujishima Takeji was born in Kagoshima Prefecture, Japan. In 1884, Fujishima moved to Tokyo, where he became a pupil of Kawabata Gyokusho and studied Japanese traditional painting. However, he later switched to Western-style painting, which he studied under Soyama Sachihiko and Yamamoto Hosui. With the recommendation of Kuroda Seiki, Fujishima became an assistant professor at Tokyo Fine Arts School in 1896. In the same year, he joined the White Horse Society (Hakuba-kai), which was founded by a group of artists that included Kuroda. In 1906, Fujishima traveled to Europe and studied under Fernand Cormon in France and Carolus Duran in Italy. Cormon's specialty was historical paintings, while Duran excelled in portraits. Upon his return to Japan in 1910, Fujishima was appointed professor at Tokyo Fine Arts School. He was a recipient of the very first Order of Culture from the Japanese Government in 1937.

This painting depicts a sandy beach, with weeds in the foreground, a calm sea in the middle and Enoshima Island in the background. The painting’s colors are characteristic of Pleinairisme techniques.

Okada Saburosuke was born in Saga Prefecture, Japan. He started as a painter in 1887, studying under Soyama Sachihiko, and became a member of the Meiji Art Association in 1891. Through Kume Keiichiro, Okada became acquainted with Kuroda Seiki, and joined the Tenshin Dojo. In 1896, Okada was appointed assistant professor at Tokyo Fine Arts School and became a founding member of the White Horse Society (Hakuba-kai) that was presided over by Kuroda Seiki. In the following year, Okada traveled to France and studied under Rafael Collin as Kuroda Seiki had done. Upon his return to Japan in 1902, he became a professor at Tokyo Fine Arts School. In 1912, he partnered with Fujishima Takeji to found the Hongo Institute of Painting, where he trained a large school of painters. He was a recipient of the very first Order of Culture from the Japanese Government in 1937.

In this image of a swamp painted in 1919, we can see traces of his master Raphael Collin, a painter of the Pleinairisme school, in the clear colors which receive the cool, morning light, in the elegant purple used in the background, and in the trunks of the trees. 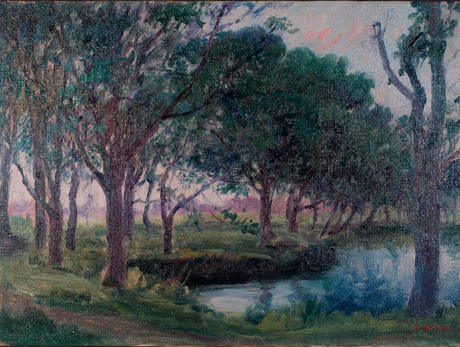 Corot was born in Paris, France and died in the nearby town of Ville-d'Avray. Beginning in 1822, he studied the classical approach to historical landscape painting under Achille-Etna Michallon, but on the advice of his master, he also frequented the forest of Fontainebleau with his sketchbook to study directly from nature itself. Corot traveled very often to Italy where he composed many paintings, soaking up the intellectual atmosphere and classic lines of Rome and the countryside nearby. From these many influences, Corot was able to produce not only realism landscapes but also landscapes of various styles, including classical landscapes and lyrical ones. Corot’s landscapes became particularly poetic and lyrical from around 1850, when he exhibited his 《Morning, Dance of the Nymphs》 at the Salon.

During the summer of 1847, when Corot spent considerable time at his father’s house in Ville-d'Avray to remain close to his father who was sick. He decorated the walls of a small garden gazebo with a series of six landscape compositions. This painting is from that series. Corot produced this work for his mother's birthday; the foreground figure, behatted and reading a newspaper against the sunlight, is the artist's father. The two ladies, chatting as they lean on the handrail of a rustic bridge in the background at the right, are thought to be his mother and elder sister. Corot himself can be seen returning from a sketching expedition, carrying a portfolio under his arm. Meanwhile, in the center of the painting, waiting to welcome the painter on the path in front of the kiosk, or pavilion, is Mr. Sennegon, the husband of Corot's elder sister. 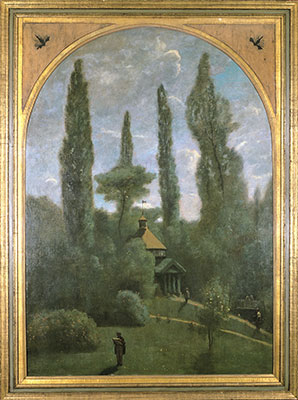 The olive groves of l'Estaque

Renoir was born in central France, in the town of Limoges. He began working as an apprentice painter at the age of 13, painting decorative motifs on china. Later, he attended Gleyre’s studio, and then entered the École des Beaux-Arts in Paris, where he made friends with Monet, Sisley, and other artists. His early works show influence from Delacroix and Courbet. In 1864, his painting was accepted for the first time at the Salon, but he was soon helping to establish a new movement called Impressionism, and thus displayed masterpieces at the first, second and third Impressionist exhibitions. Among the great works of the early years were 《The Theater Box》 (1874) and 《The Dance at Le Moulin de la Galette》 (1876). In 1881-82 Renoir traveled to Algeria and to Italy. In the end of January 1882, on his return journey from Italy, Renoir visited L'Estaque, staying at a hotel overlooking the sea. There, he got to spend time with Cézanne, a painter whom he respected.

In this painting, Renoir’s treatment of the sea and olive grove with oblique paralleled strokes appears to echo the technique of Cézanne. The season was in fact winter when Renoir painted this piece, but the air was spring-like, clear, and bright. Sunlight pours over the painting, soaking into the foliage of the olive trees and spraying into the atmosphere. "Spring without wind, just peaceful sunshine," he wrote to the art dealer, Durand-Ruel, "This is pretty rare in Marseille." This painting was displayed at the exhibition held at the Metropolitan Museum of Art in New York in 1937. 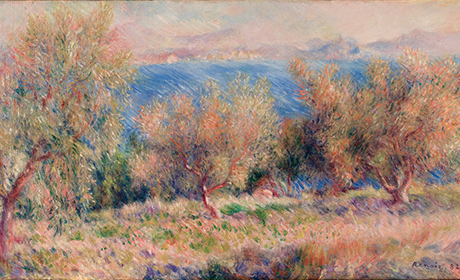