Marubeni Corporation (Marubeni) is pleased to announce it has signed a Memorandum of Understanding with Antofagasta plc (Antofagasta), one of the world’s leading copper producers, to become a 30% partner in the Antucoya copper mining project (project) for a total cash consideration of US$350 million (subject to closing considerations). Part of the estimated development cost of US$1.3 billion for the Antucoya project is expected to be raised through project financing.

The total amount of copper ore reserves related to this project are estimated to exceed 640 million tonnes, and after the start of production in 2014 the project is expected to produce approximately 80,000 tonnes of copper ingot annually over a period of approximately 20 years. Of this, Marubeni will be entitled to approximately 24,000 tonnes per year of copper ingot (payable copper), which corresponds to Marubeni’s 30% interest in the project. There is potential sulphide ore in the underlayer of this project, which could form the basis of future concentrate production as well.

Antofagasta is one of the largest copper producers in the world and the only Chilean copper company listed on the London Stock Exchange. Marubeni has established an excellent and long-lasting relationship with Antofagasta since it began working with them on the Los Pelambres project in Chile. The current project will be the fifth joint project between Marubeni and Antofagasta following the Esperanza, El Tesoro, Mirador and Los Pelambres mining projects.

In Marubeni’s Mid-term Management Plan SG-12, Marubeni has positioned natural resources as one of its priority business fields, and is striving to increase its interests in natural resources. This project adheres to this management strategy.

Through this investment, the total amount of copper ingot from Marubeni’s interests will increase from 125,000 tonnes a year to 150,000 tonnes a year (payable copper equivalent), placing Marubeni as one of the top owners of copper assets among Japanese companies. Beyond participating in the copper mine development and copper production with Antofagasta in Chile, Marubeni plans to contribute to the stable supply of copper resources to Japan by securing high quality copper resources, while continuing to grow its copper business with a vision of expanding into other geographic regions.

<Overview of the Antucoya Copper Project>

The Antucoya copper project is a development project expected to start  production of copper in 2014 using SX-EW technology. Antucoya has proven and probable copper reserves of 642 million tonnes and expects to produce an average 80,000 tonnes of copper annually over its 20 year mining lifespan. 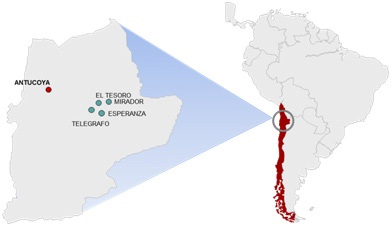