TOKYO - Marubeni Corporation (Tokyo: 8002) and Toshiba Corporation (Tokyo: 6502) today announced that they will cooperate in the construction of the Patuha Unit 1 project, a 55MW geothermal power plant in West Java, Indonesia. Marubeni will act as a main contractor and oversee management of the project under a full turnkey contract from PT Geo Dipa Energi, the plant owner and operator, and Toshiba will supply the plant’s essential equipment: the steam turbine and generator and key auxiliary and management equipment.

Geothermal energy is a renewable energy source that uses naturally occurring subterranean heat sources to produce steam and generate electricity, with much fewer emissions of carbon dioxide than the other thermal power generation. Unlike some renewable energy sources, such as wind and solar power generation, geothermal energy is not weather dependent, and is able to generate stable output that contributes to secure energy supply. Today, geothermal power plants around the world have a combined generating capacity of over 10,000MW.

Indonesia is recognized as having the world's largest geothermal resources, with a potential generating capacity of 28,000MW, although the installed capacity to date is little over 1,100MW. As economic growth drives rising demand and produces shortage in energy supply, the Indonesian Government is promoting geothermal power projects to raise generating capacity and reduce reliance on petroleum, where demand outstripped local production in 2004. The government’s plans include IPP projects with a capacity of 10,000MW by 2025, which the Japanese government is supporting through its yen loan program.

Patuha Unit 1 project is a full turnkey contract for a 55MW geothermal power plant in the suburbs of Bandung, the capital of West Java province and, with a population of over 7.5 million, Indonesia’s third largest city. The plant is scheduled to start commercial operation in spring 2014 (Toshiba expects to start equipment delivery in summer 2013) with Marubeni’s and Toshiba’s best performance. The project is financed by Indonesia’s state-owned PT. Bank Negara Indonesia (Persero) Tbk.

Marubeni’s rich experience of power plant project management in Indonesia, and the quality and performance of Toshiba’s geothermal steam turbines and generators, plus a record of success in supplying power generating equipment in the Indonesian market, were key factors in the selection process.

Toshiba is also highly familiar with the Indonesian market, where it is a market leader in equipment supply. The company’s record to date includes supply of 12 steam turbines and generators (4,200MW combined capacity) for four thermal power plants, including the Tanjung Jati B coal-fired thermal power plant now under construction, and 26 hydroelectric turbines and generators (1,500MW) for eleven hydroelectric power plants.

Going forward, Marubeni and Toshiba will seek to contribute to the expansion of electric power supply in Indonesia, including continued participation in projects to promote lower emissions of carbon dioxide and environmentally friendly geothermal power and other renewable energy projects. The companies propose to work together on a number of geothermal projects now at the planning stage, including the following.

< Location of the Patuha Site > 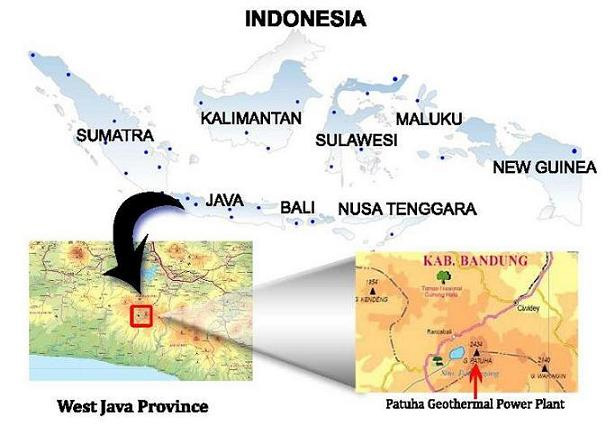