Marubeni Corporation (Marubeni) announces that a newly formed Alberta corporation (Bid Co), held as to a 40% and 60% interest by Marubeni and Winsway Coking Coal Holdings Limited (“Winsway”) (HKSE: 1733) respectively, has entered into a definitive agreement (the Arrangement Agreement) with Grande Cache Coal Corporation (GCC) (Toronto Stock Exchange: GCE) pursuant to which Bid Co has agreed to acquire all of the issued and outstanding common shares of GCC (the Common Shares). The transaction is to be completed by way of a plan of arrangement* under the Business Corporations Act (Alberta) (the Arrangement).

GCC is an Alberta based metallurgical coal mining company whose experienced team of coal professionals are managing a mine that produces metallurgical coal for the steel industry and holds coal leases covering over 22,000 hectares containing an estimated 346 million tonnes of coal resources in the Smoky River Coalfield located in west-central Alberta, Canada.

Upon completion of the Arrangement, GCC shareholders will receive cash consideration of C$10.0 per Common Share (approximately 778 yen), resulting in a total cash acquisition price of approximately C$983 million (approximately 76 billion yen) for the entire issued share capital of GCC. The Arrangement is expected to complete by the end of this Japanese fiscal year.

Deutsche Bank Securities Inc. and UBS Securities Canada Inc. are acting as financial advisors to GCC in the transaction and both have provided the Board of Directors of GCC with a verbal opinion regarding the proposed transaction. A copy of each financial advisor's written opinion will be included in the information circular to be sent to holders of Common Shares for the special meeting to be called to consider the Arrangement. TD Securities Inc. is acting as financial advisor to Bid Co, Osler, Hoskin & Harcourt LLP is acting as legal counsel to Bid Co and Freehills and Davis LLP are acting for Marubeni.

* A plan of arrangement is a statutory procedure available under the Business Corporations Act (Alberta) which is commonly used to facilitate complex acquisition transactions due to its flexibility.  The process includes, among other things, the entering into between the parties of the arrangement agreement, which sets out the terms of the proposed transaction and shareholder and court approval.


Purpose of the Acquisition

(1) Business history between Marubeni and GCC
The Grande Cache Coal Mine which is operated by GCC is one of a few Canadian coal mines that produces hard coking coal (“HCC”), which is a raw material of cokes used in the steel making process. The coal mine has been operating since 1969 and Marubeni has acted as buyers’ agent for Japanese steel mills for more than 40 years.  Marubeni has also been an exclusive seller’s agent for GCC for the Japanese market since 2004. The coal mine produces around 2 million tons annually and it has in place an expansion plan underpinned by its large resources of more than 300 million tons.
(2) Purpose of the acquisition
As a result of the increase of crude steel production in developing countries fueled by strong economic growth, the supply-demand balance of HCC has been tight and the tightness is expected to increase in the future. Under the current supply environment where supply sources of HCC are heavily concentrated in Australia, it is important from a point of diversification to secure an alternate source of supply of HCC from countries other than Australia to ensure stability of supply to Japanese end users. This acquisition will also provide Marubeni with a platform for future growth in the coal sector in Canada.

Grande Cache Coal Mine is located in west central Alberta in the Rocky Mountains. It operates both surface and underground mines. 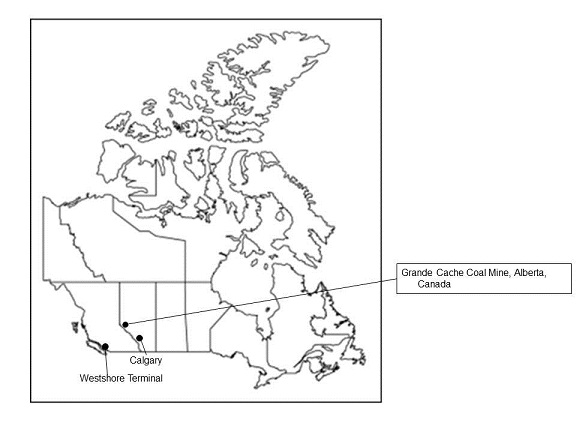