Marubeni Corporation has entered into an agreement with DONG Energy in which  Marubeni will acquire a 49.9% stake in Dong Energy’s 172MW Gunfleet Sands offshore wind farm.

Marubeni will pay DONG Energy a cash consideration of approximately GBP 200 million for the 49.9% stake in Gunfleet Sands. Completion of the transaction is conditional on, among other things, Marubeni obtaining project financing commitments from financial institutions.  Completion is expected to take place sometime during the 4th quarter of 2011.

The wind farm, located in the Thames Estuary off the Essex coast, produces green power corresponding to an annual power consumption of some 125,000 British households. The  wind farm first started producing green power in August of 2009, and the entire wind farm went into production in the spring of 2010.

DONG Energy and Marubeni have also agreed to a long-term purchase agreement for the power production and green certificates stemming from Marubeni's share of Gunfleet Sands' wind farm.

With the acquisition, Marubeni total worldwide power generating capacity will come to 8,796MW (net), including the 450MW of renewable energy assets.


<About DONG Energy>
DONG Energy is one of the leading energy groups in Northern Europe. It is headquartered in Denmark. Their business is based on procuring, producing, distributing and trading in energy and related products in Northern Europe. They have approximately 6,000 employees and generated DKK 55 billion (EUR 7.3 billion) in revenue in 2010. 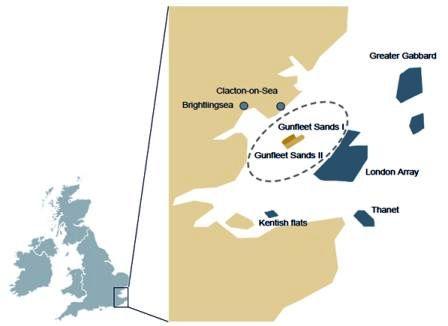