Marubeni has been awarded a Contract for Rehabilitation of Textile Factory

Marubeni Corporation (“Marubeni”) has been awarded a contract for Rehabilitation of Textile Factory in Luanda, the capital city of the Republic of Angola (“Angola”), from the Ministry of Geology, Mining and Industry (“MGMI”), Angola. The contract is worth approximately 25 billion Japanese Yen and the rehabilitation is expected to be completed in May, 2013.

Angola had devastating damage on its textile industries and cotton fields. For the purpose of reconstruction of textile industries and creation of employment opportunities, Marubeni had been discussing MGMI for the rehabilitation of 3 textile factories (located in Luanda, Benguela and Dondo) on full-turn-key basis and awarded the contract for the factory in Luanda as 1st phase.

For the first time toward Angola, this contract is financed by buyer’s credit of Japan Bank for International Cooperation.

Under this project, the existing buildings will be renovated and the factories will be equipped with the state-of-art textile machines (spinning, weaving, knitting, and dyeing machines) and the utility facilities (captive power house, drain facility and etc). This project enables Angola to substitute some of the textile products being imported with home-made products, such as fabrics for uniforms and shirts, towels, bed sheets, fabrics for denim jeans and etc.

The government of Angola has been actively launching many reconstruction projects in other industrial areas which were also damaged. Marubeni will continue the effort to support such projects and expand its business activities in the country. 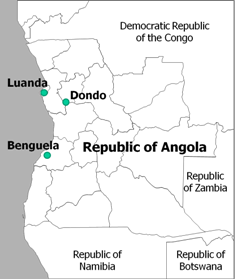