The sale and purchase agreement was executed on 29th September with completion anticipated in December 2010 subject to the approval of the Norwegian authorities. Including not only the purchase price but also the adjustment for interim period cash flow and the future capital expenditure, we, Marubeni, will make investment of approximately USD150million in total.

The Oselvar field is currently under development. The development plan was approved by the Norwegian authorities in 2009 and the development is now well underway. Production start up is planned for the fourth quarter 2011. The net production including Enoch acquired through this transaction is anticipated to peak at approximately 3,000 BOEPD.

Marubeni ranks upstream investment in the E&P sector as one of our core business lines and are focused on acquiring good quality assets. We hold working interests in oil and gas fields in the UK North Sea, US GOM, India, and Qatar. Through this transaction, we can enter into the Norwegian North Sea, an area with significant remaining potential. We are confident that this acquisition will be a stepping stone to allow us to further develop our business in Norway.

Norwegian Energy Company ASA (Noreco) is an independent oil and gas company with activities in Norway, Denmark and the United Kingdom. Noreco’s main focus is to explore for oil and gas, and the company is among the largest holders of exploration licenses in Norway. In addition, the company has ownership in eight producing oil fields and more than a dozen oil and gas discoveries. Noreco employs around 100 oil and gas professionals and is headquartered in Stavanger, Norway. The company is listed on the Oslo Stock Exchange (ticker NOR)

<Location of Oselvar and Enoch oil and gas fields> 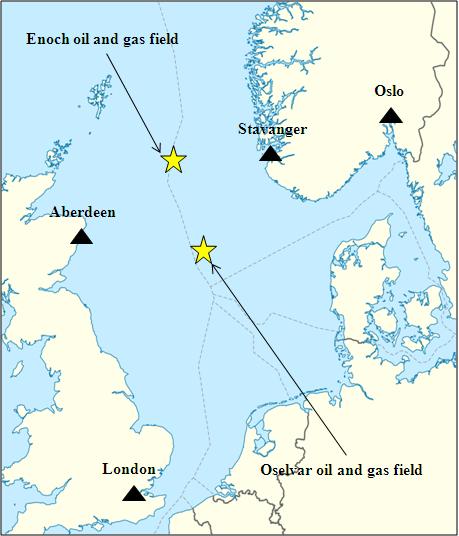