What would Marubeni do in the world of ONE PIECE? #2
Marubeni Develops Water Businesses with its Partners Around the World

Saudi Arabia: a nation nearly completely covered by desert. Rivers and lakes are few and far between, and rainfall is almost nonexistent. Groundwater alone is not enough to provide for the country’s water-related needs, so most fresh water must be produced using seawater.

Marubeni, which has been involved in various water projects around the world for about 30 years, took part in the Shuqaiq 3 Desalination Project to contribute to providing a stable water supply in Saudi Arabia. A seawater desalination plant was built in the Shuqaiq area on the Red Sea coast and began commercial operation in January of this year (2022). As the leader of the consortium that won the bid for the project, Marubeni has been in charge of all aspects of the plant’s construction, maintenance, operation, and financing.

The reverse osmosis (RO) membrane plant is one of the largest of its kind in the world, producing 450,000 ㎥ of water per day, which is equivalent to the daily domestic water supply of 2 million people. This water will be sold to the Saudi national water company for the next 25 years through a locally established company in which Marubeni is the largest shareholder.

In Saudi Arabia and other Middle Eastern countries, it used to be common practice to construct desalination plants alongside thermal power plants using oil or natural gas to produce fresh water using steam generated from the power generation. In contrast, RO membrane systems, which use pressure to remove salt, can produce water in a single facility and are highly energy efficient. Recently, technological innovations have reduced the cost of plant construction, and RO membrane systems are becoming the mainstream.

“Water is public infrastructure, so it is important to build relationships with stakeholders such as local governments, police, fire departments, and relevant ministries and agencies, and we have put considerable effort into this,” said Mr. Shunjiro Shibata, General Manager, Environmental Infrastructure Team-I, Environmental Infrastructure Dept., who gained similar experience through a water related project while stationed in Qatar. After being affected by the Great Hanshin-Awaji (Kobe) Earthquake in 1995, Mr. Shibata realized firsthand that people cannot live without water, which is why he aspired to join the water industry.

The global water market is expected to grow from 70 trillion yen in 2020 to 110 trillion yen by 2030, and “the water business is becoming more important than ever, with ‘Ensure access to water and sanitation for all’ being one of the goals of the SDGs,” says Mr. Shibata. In recent years, the world population has continuously been growing, urbanization has been progressing in developing countries, and water infrastructure in developed countries has been deteriorating. In regions where rainfall has decreased due to climate change, demand for desalination and reuse of treated sewage for drinking water has increased, while in regions where rainfall has increased, stormwater and wastewater treatment has become a challenge.

Marubeni is currently providing water services to 16 million people around the world. “We would like to increase this number to 50 million,” says Mr. Manabu Sugawara, Deputy General Manager, Environmental Infrastructure Dept. One of the key pillars for providing these services is the development of large plants like the one in Shuqaiq. The other is the expansion of concession businesses (currently participating in Chile, the Philippines, and Portugal) that provide water services directly to consumers. Marubeni is also considering new opportunities in privatization projects and aiming to become fully involved in the sewage reclaimed water business, where demand is expected to increase.

“The key to success in any business,” Mr. Sugawara says, “is a complementary relationship with a trusted partner.” He adds, “We bring our strengths, such as governance expertise and finance, to enhance corporate value, while our local partners help us navigate through what we cannot do.”

By joining forces with all stakeholders, Marubeni has established excellent foundations for and will continue to build up businesses that support the foundation of life: water. 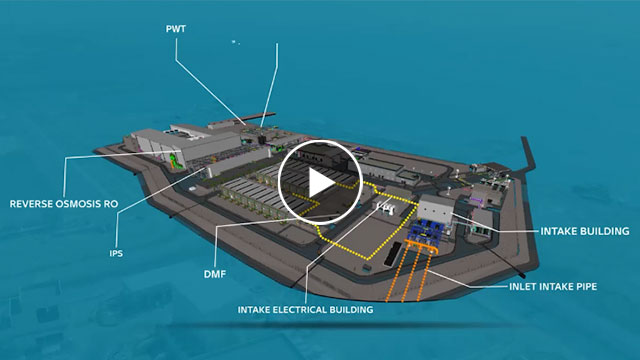