What would Marubeni do in the world of ONE PIECE? #4
Creating a Cycle of Local Production and Local Consumption of Salmon through Land-Based Aquaculture

Global demand for Atlantic salmon is increasing, in part due to growing health consciousness and the unprecedented popularity of sushi. But this ever-rising global demand cannot be met by conventional aquaculture alone. This is because conventional aquaculture, where fish are raised in net pens on the sea surface, can only be practiced in coastal areas at high latitudes that have low sea water temperatures. Severely limited availability of suitable production sites is not the only issue, either—marine pollution due to waste product spillage and leftover fish food from salmon farms is also a growing concern.

While aquaculture certainly presents immense issues, conventional wisdom says that fish live in the sea, so they would naturally be farmed there. But one company turned this idea on its head by asking, “Why not solve the problems of farming salmon in the ocean by raising them on land instead?” And thus Danish Salmon was born! Danish Salmon, founded in Denmark in 2009 and in which Marubeni invested in 2020, is one of the few companies that has succeeded in creating a stable commercial supply of land-farmed Atlantic salmon. The company farms Atlantic salmon in indoor tanks using a recirculating aquaculture system (RAS). Their farming facility is currently being expanded with construction due to be completed soon. Once the facility begins full-scale operations, annual production is expected to increase to 2,700 tons.

RAS is an environmentally friendly system that saves water and prevents pollution. Because water in the RAS is thoroughly filtered and recirculated—in other words, the same water is used over and over again—the amount of water used for breeding is actually quite small. The system also thoroughly treats wastewater, reducing the risk of uneaten food and other waste being discharged into rivers or the sea to essentially zero.

Danish Salmon's facility uses multiple tanks into which fish are divided based on their stage of development. The development process, which takes 22 to 24 months, begins by placing eggs in tanks and hatching them, then rearing the hatched salmon until they grow to harvesting size (4.5 kg). During the rearing process, the salmon that have grown enough to set off for the “ocean” are transferred from freshwater to saltwater tanks, where they then swim against artificial high-velocity currents that replicate their harsh natural environment. Due to their plentiful amount of exercise, the fully developed salmon are leaner. According to Kim Lyhne, Danish Salmon’s CEO, this leanness makes their taste comparable to wild salmon. The company harvests fully developed salmon once every two weeks year-round.

Land-based aquaculture has another advantage: greater sustainability. Because land-based aquaculture is not limited to certain locations, fish can be produced at facilities nearer to consumers. In fact, land-farmed fish can hit store shelves as quickly as the same day they were harvested. If more places that currently transport fish across great distances by air had land-based fish farms nearby, Atlantic salmon could be produced and consumed locally, thus greatly reducing the amount of greenhouse gases produced by the transportation process.

“As is already happening here in Europe, global consumer demand for sustainable products is expected to grow,” says Kazuki Kaida, manager of Danish Salmon, who is seconded there from Marubeni. “Our mission is to deliver sustainable salmon that are raised in a sustainable way to consumers around the world.”

Today, the prices of imported goods are skyrocketing due to a variety of factors, including the pandemic and the changing global geopolitical landscape. The price of Atlantic salmon is no exception. Rising in tandem are great expectations for land-based salmon aquaculture, both in Japan and other regions around the world.

Marubeni, founded and headquartered in Japan, is now aiming to greatly increase the use of RAS within its home country and has teamed up with Norwegian company Proximar Seafood AS (founded in 2015) to do so. The two companies have reached an agreement that Marubeni will be the exclusive distributor in Japan for all the Atlantic salmon produced by the RAS facility Proximar has recently constructed in the country.

Proximar’s facility is located in Shizuoka Prefecture, an area close to Mount Fuji and the three large consumer markets of Tokyo, Nagoya, and Osaka. Once at full operations, the facility will be one of the largest land-based salmon farms in Japan. Expected product volume for 2024, its first year of sales, is 2,500 tons, with plans to gradually expand to 5,300 tons annually. All water used for breeding in the facility, including artificial seawater, will be sourced from the naturally clean and pure groundwater at the foot of Mount Fuji.

Once the salmon are produced, the Marubeni Group is perfectly positioned to distribute them through the Group’s direct sales channels to mass retailers and restaurant chains as well as a strong network of processors. By utilizing these resources, Marubeni will be able to supply extremely fresh Atlantic salmon to communities around Japan. This will result in a longer period in which the salmon can be safely consumed, thus leading to a reduction in food loss.

This initiative is “a new challenge in the Japanese seafood food sector,” says Kazunari Nakamura, General Manager of Marubeni’s Fresh Food Department. “Japan’s food self-sufficiency level is low. Through this socially significant initiative to domestically produce Atlantic salmon on a large scale, Marubeni will contribute to both raising our food self-sufficiency level and creating a sustainable society.” 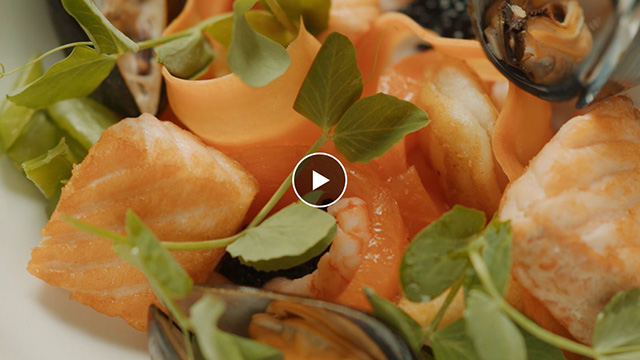